David McCullough the tells the history of the building the Panama Canal.  He starts with the impact of the California Gold Rush on the Panama Isthmus’s 51 mile separation of the Pacific and Atlantic. The 49ers transit across the isthmus was by boats up the often dangerous Chagres River and then by mules for the final 20 miles over the old Spanish trails – which had not been well maintained.

The railroad -built in 1850 – became one of the most profitable in the world, charging up to $25 per passenger to travel cross the isthmus.  Until the opening of thePanama Canal, it carried the heaviest volume of freight per unit length of any railroad in the world.

McCullough tells of the sad story of French entrepreneur Ferdinand de Lesseps who went bankrupt while trying to build a sea level canal.

Then President Theodore Roosevelt enters the picture by orchestrating a revolution that removed the Panama Isthmus from Colombian rule.  The new Panamanian government allied the US to  placed The canal zone squarely in American Control.

The story of the Panama Canal is complex, full of heroes, villains, and victims. McCullough’s long, richly detailed, and eminently literate book pays homage to an immense undertaking.

Here are some pictures of our trip through the Panama Canal on May 9, 2014. 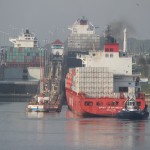 Entering the Gatun locks on the Atlantic side. May 9, 2014 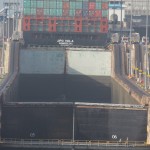 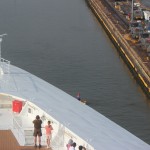 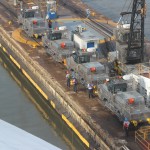 Closer view of the the locomotives lining up to take our lines. May 9, 2014 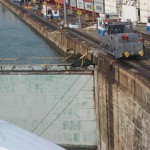 The locomotives take turns holding us in the center. First one moves forward and then the next. May 9, 2014. 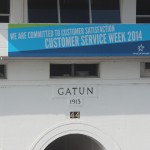 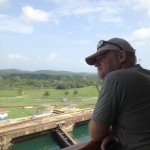 Supervising the activities on the Gatun Lock, Panama Canal, May 9, 2014. 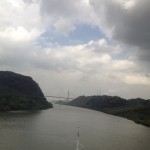 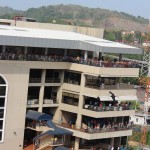 Lots of people at Miraflores locks to see the Disney ship. May 9, 2014 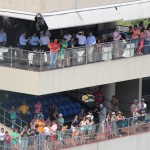 Part of the crowds at the MiraFlores Locks. 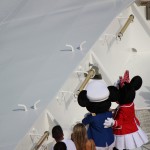 Mickey and Minnie waving to crowds at the Miraflores Locks. May 9, 2014 Panama Canal. 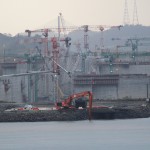 Construction of new wider and longer locks. Pacific Side.