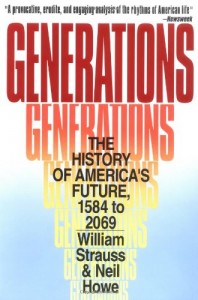 I first read Generations in 1994 and found it to be an interesting explanation of how different generations of Americans react differently to similar events. The book concluded with predictions of what would happen in American in the near future.

In 2002, I realized that things were happening very close to the predictions. So I read the book again to gain a better understanding of Howe’s and Strauss’ theory and realized that they had been even closer in their predictions than I had remembered.

Some of the examples written in 1991 are

“… by the year 2000, midlife women will surge into boardrooms, media anchor booths, university presidencies, and Congress-and will begin making plausible runs for the White House.”
“… the Boom may split along geographical lines-for example, with urban, bicoastal New Agers squaring off against heartland evangelicals.”
” no mistake: faced with crisis, this generation [Boomer] of onetime draft resisters will not he
sitate, as elder warrior-priests, to conscript young soldiers to fight and die for righteous purpose… As Boomers begin endorsing global crusades, the 13ers [Gen X] will turn toward isolationism.”

Not 100% accurate, but clearly better than other books I’d read in the past. I had this deja vu feeling I was experiencing Asimov’s “psychohistory” that is the main theme of his Foundation series.

The second hypothesis is that there is a four phase generational cycle of these cohorts that predicts each cohort’s behavior, especially how society treats its members of different ages at different points in time.

In addition, they traced these generation cycle from 1584 to the present and showed that the cycles repeated like clockwork, except for the shock of the civil war which caused the cycle to jump.

They make the point that not everyone in a cohort is identical. The cohort defines themes that predict the overall reaction to events by each generation.

They cycle occurs in this order: Idealist, reactive, civic, and adaptive.

Civic Cohort: An example is the GI generation (born 1902-1924) that was raised in the depression where massive government programs were put in place to help them. As young adults, they fought and won WWII. After the war many of them went to school on the GI bill. They have a strong belief that government works.
Adaptive Cohort: Following the Civics is the adaptive cohort which are referred to as the “Silents” (Born 1925 to 1945). They generally shared the GI’s values. The “silents” work within the system. They are generally trustful of the leadership of previous generations.
Idealist Cohort: This is my group, the “baby boomer” generation (born 1946 to 1960). In our youth there were unlimited economic opportunity, so we turned to spiritual matters, questioning and rebelling against the values of the GI and Silent generation.
Reactive Cohort: This is “Gen X” (Born 1961 to 1981). They are viewed as expressing a cynical, world-weary attitude as young adults. Their life experience with government is exactly the opposite of the GI generation; at every stage of the Gen Xers life, government’s resources have been directed to benefit someone else.

The book is a useful way to think about history and is entertaining.