↓
Home→Book Reviews→Anthropology→Crisis of Control: How Artificial SuperIntelligences May Destroy or Save the Human Race

Crisis of Control: How Artificial SuperIntelligences May Destroy or Save the Human Race 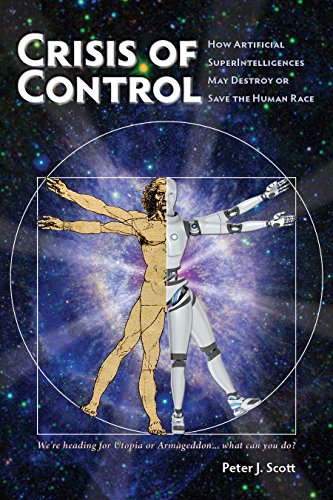 The book is fascinating and yet scary and hopeful at the same time.  Crisis of Control is straightforward,  challenging, and at times humorous.  Scott’s footnote in the very beginning about impressing people that you know how to pronounce “Chicxulub Crater”   (The resulting crater from the asteroid that killed the dinosaurs) is just one of many humorous asides spread throughout the book.

The book is written in a way that non-technical people can follow. He doesn’t dumb it down.  He just explains it well.  Scott is an excellent storyteller.

In the book, Scott explains how two separate trends are creating a unique threat to life on earth.    The combination of the ever-expanding capabilities of new technologies and the rise in artificial intelligences could bring us into a future Utopia, or into a Dystopia with great suffering and injustice, or even extinction.

Scott covers the choices that are facing us and their possible consequences. Some of the facts He shares are uncomfortable, yet he never shies away from discussing the good, the bad, and the ugly of the situation that we face. He links highly complex technologies to the need for us to consider the impacts and respond in a way to guide this development in a positive direction.  I do worry some, as many of these outcomes depend on political leaders who put the good of humanity above their own political gain.

Scott does highlight a path that would result in a Utopia future and points out the many off-ramps that could lead us into our own destruction. While the book contains a number of warnings,  it also contains a significant hope.

I read part of the book and listened to other parts of the book in my car. Scott is the narrator of the Audible version.  His voice is easy to listen to.  He has one of those UK accents that comes across to us Americans as a trustworthy person.  At the end of the audible version there is a conversation with one of his children that will have you laughing and crying at the same time.

I had the privilege to work with Peter Scott at NASA/CalTech’s JPL in Pasadena.  His thinking and his work have always been of the highest caliber.   He is also a really nice guy.