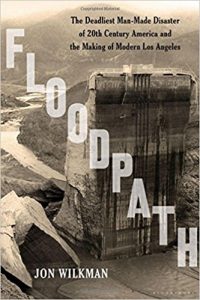 This is not just the story of the St Francis  Dam collapse and killer flood that followed, but an accurate account of how Los Angeles got the water to enable it’s tremendous growth and the life of William Mulholland.

Mulholland is the man who foresaw the need Los Angeles would have for water and who – more than anyone else – is the responsible for the current Southern California water infrastructure.  It follows his life from Ireland to California.  The short version of his story is that he joined the water department as a ditch cleaner and ended up running it (It should be noted that the department went through many transition during this period which the book explains well).   He was a self taught Civil Engineer – which very common in the 1800s.

It covers the creation of the gravity-fed Los Angeles Aqueduct and the related water wars in the Owen Valley. It was his fear of sabotage that led him to want to store water close to LA resulting in the construction of both the St Francis and Hollywood Dam (Which is still being used at half capacity – the book explains why).    It has one of the most balanced discussions of the Owen Valley water rights controversy that I have read.  Normally the discussions boil down to either “LA was Bad” or “LA did nothing wrong”.  The truth is in the middle and is a little gray.

The book describes the event before, during and after the collapse of the St Francis Dam.   The dam failed 12 hours after He and his Assistant Chief Engineer had personally inspected the site and declared that the leaks observed that morning by the Dam Keeper posed no risk.   431 people died as a result of the flood.  Mulholland told the world that he was a fault for any mistake made that resulted in the dam’s collapse.  However, As a result of the collapse Mulholland was a broken man and his career was finished.

They most interesting thing was that actual understanding of how the Dam collapsed came many years later.  Computer modeling was able to come up with a scenario that match the facts that had been collected.

As a result of the collapse, Water Storage was done far from LA.  The creation of Lake Crowley for water storage was something Mulholland had opposed but with his departure storage of water in long valley became a reality.

One thing not in the book is that Dave McCoy was hired by the LA Department of Water and Power as a hydrographer (i.e., He measured the snow pack).   He was an avid skier and in 1957 was the California State Champion in skiing.

He had set up a private rope tow at McGee mountain using parts from a Model A Ford. He tried to set up a permanent rope tow the bank turned him down. However, his future wife Roma was the bank secretary, so I don’t think it was all bad.   He became the Dam Keeper at Crowley lake and while measuring snow in the nearby hills he noticed the snow was best at Mammoth Mountain.  In 1942 he moved his rope tow to Mammoth Mountain.

So without the collapse of the St Francis Dam there would be no Crowley Lake, no need for Dave McCoy to be hired to watch the dam, not discovery of the great snow at Mammoth and no Mammoth Mountain ski area.   In 1942 no one bid on the Forest Service request to build a ski resort at Mammoth.  Dave had his rope tow, but had no money so he didn’t bid.