Skied 36 runs at Snow Summit today. Haven’t been here since the winter of 1981 when Gayle and I came up here to get our engagement pictures, but the photographer got sick so we just skied. It was while driving back down the hill in the bumper to bumper slow traffic that we decided that Mammoth was an easier drive. BTW, the decision had nothing to do with spinning out of control and hitting a snow bank on the icy road between Snow Valley and Big Bear during a snow storm.

Part of the reason to come up today was that Mammoth has bought Snow Summit and Bear Mountain so my Mammoth pass now includes these two ski areas. 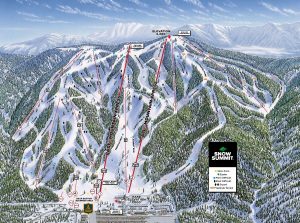