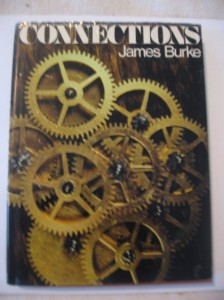 Connections is the companion volume to the BBC television series “Connections” produced in the Autumn of 1979.  I originaly read connections after watching the BBC series on my local PBS station.

Each chapter  begins with a particular event or innovation from Ancient or Medieval times and traces a path through a series of seemingly unrelated connections to a essential aspect of the modern world. For example, the chapter “The Long Chain” traces the invention of plastics from the development of a type of 16th century Dutch cargo ship.

Burke has three corollaries to His thesis;

1.  History is driven by individuals acting only on what they know, with no concept as to where their actions will eventually lead.   Therefore, we will be surprised to what the innovations of today eventually will lead.

2. History progresses because of the synergistic interaction of past innovations.

Burke concludes by asking what happens when this rate of  change  becomes too much for the average person to handle?  What will this mean to our freedoms?

Overall it is entertaining to see by the connections Burke is able to weave among past events to today’s advancements.