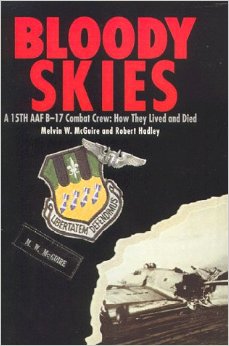 This book has special meaning to me as my Father William J. Hughes served in the 15th AAF B-17 20th Squadron, 2nd Bombardment Group, 5th Wing, Amendola Air Base, Foggia, Italy with Melvin McGuire.  The book covers the period of time that my father was in combat and there is one mission when McGuire and my father are on the same plane.

McGuire gives a personal account of his training and missions.  I learned how a B-17 operated while on a mission.  The B-17s climbed slowly compared to what we experience on Jet Airlines.  They spend hours climbing to altitude and spent most of the mission breathing bottle oxygen.

McGuire arrived on the base on the day that the 20th lost every plane on a mission to bomb an Oil Refinery on Czechoslovakia.  My father arrived later that same week.  This event sets the undertone for the whole book that they didn’t expect to survive.   My father confirmed with me that he had no expectation of surviving the war, but he and his comrades firmly believed that their sacrifice was worth the goal of defeating the Nazis.   McGuire devotes a chapter explaining how all the planes were lost on mission 263.

In Chapter 27, McGuire described a mission he flew with my Father on Christmas Day, 1944. McQuire had been assigned to fly with my Father’s regular crew to fill in as the Bombardier.   McGuire only needed two or three more missions before his tour was done and you can taste the beginning of the realization that he might be one of the few that makes it home.   It was mission to Bomb an oil refinery in Brux, Czechoslovakia.  McGuire gives you an idea of what it was like to anticipate the started of the flak and then to be bounced around the sky by the turbulence caused by the flak.   On that mission McGuire saw the plane he normally flew with be hit.  The plane was able to make back to Italy and fortunately, the pilot wounds were not fatal.

There is so much in this book to give you a picture of what these men went through.  The contribution of the Tuskegee Airmen is also included.  My Dad always told us that the Tuskegee Airmen are the reason he survived the war and McGuire’s account backs this up.

I highly recommend this book to understand the personal experience of B-17 crews in WWII.

View all my goodreads reviews of History books