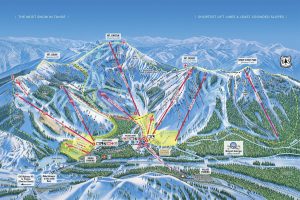 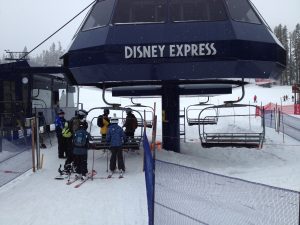 Sugar Bowl is the original California ski area.   It start as rope tows in the 1930s.  In 1939 the first chair lift was installed (almost 2 decades before Mammoth Mountain installed their first chair lift). When it opened it had a lodge that could accommodate 600 people.   The resort was along the Southern Pacific rail route across the  Sierra Nevada so access was easy.

Walt Disney was one of the first investors and one of the peaks at the resort was renamed Mt Disney in his honor. Sugar Bowl was also featured in the 1941 Disney cartoon The Art of Skiing in which Goofy goes to Sugar Bowl to learn how to ski.

After a great start, world war II brought it almost to a full stop.  After the war the resort began to expand again.  A 2nd chair was installed in 1950.    In 1953 the first Gondola was installed, the first one on the west coast.

Sugar bowl has kept up with the times and has modern lifts. It is a great mountain which I will visit again.