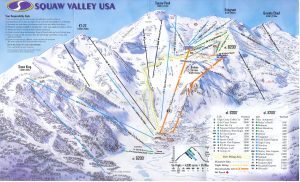 Snow coverage was not great due to the drought.  Some lifts/runs were closed due to lack of snow. 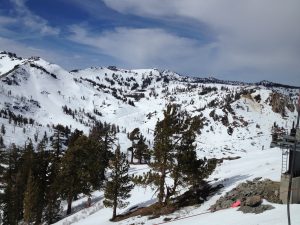 I had very high expectations as I’d never skied here before. I was disappointed.  Part of my disappointment was that the snow was thin due to the drought.  The problem was that for many lifts on the main mountain all the runs feed into the same run that goes from the upper area to the base.  This puts skiers of all abilities on the same run.  The place was crowded and I was spending a lot of time avoiding people skiing beyond their ability.

I did find good skiing on the backside (Shirley Lake Express,  Granite Lake and Solitude) and the black diamond runs really are black diamond.

After grabing a quick lunch I decided to go over to Alpine Meadows as the lift ticket covers both places.