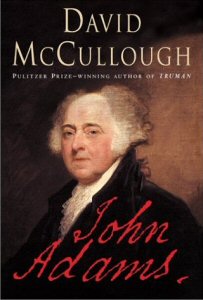 This book is the Pulitzer Prize wining story of  the forgotten founding father – John Adams – the 2nd President of the United States.

John Adams had a huge impact on the founding of the USA.

In book we learn of his early life and his controversial decision to provide the successful legal defense to the British Solders involved in the Boston Massacre.  Which was surprising given his cousin was Sam Adams.

The book reads like an adventure novel as it covers  his role in convincing the Continental Congress to declare for independence and his assistance to Thomas Jefferson in writing the declaration of independence and being a diplomat in Europe where he helped negotiate the peace treaty with Great Britain.

But those are just facts,  what the book does is to unveil the deep love between him and his wife Abigail and his deep friendship with Thomas Jefferson which turned to dislike and then back to deep friendship.   It makes him a person and not just an boring historical figure.