I did 28 runs in the west resort (Which was the only one open) . Only 4 ways from top to bottom. Skied each 7 times. Skied here a lot in the 60s and early 70s with my family when the west resort was  called Blue Ridge Ski Area.  The west resort is one of the oldest ski resorts in the country. Its first year of operation was 1937 with a rope tow, and it built the 2nd chairlift in California in 1947

My brother Tim broke his leg at Blue Ridge.  I was a good brother so I stopped skiing and rode in the van with him. I even fed him an ice cream cone as he lay flat on his back on the way to the hospital to get his leg checked and got some of the ice cream in his mouth.  I remember that Mom and Dad were sure his leg wasn’t broken. 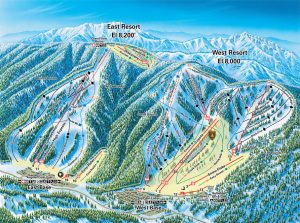