↓
Home→Management→Don’t Over or Under Manage

7th   Installment: Don’t Over or Under manage

There are two extremes which should be avoided in developing schedules and especially in managing people.  One extreme is having too much detail, too much direction.  This results in hour by hour or even minute by minute scheduling.  Many projects and staff get drowned in a sea of detail.

Here’s a humorous example of too much detail: I had a college friend who worked at the first gas station to open on I5 in California’s southern central valley. At the end of each shift his manager would give a long  directive of how to sweep the lot instead of saying just “sweep the lot”.  Everyday the manager would include a detailed direction of how to get a piece of cardboard to act as a dust pan, which included the location of the trash bin, the size of card board box to find,  how to locate and then how to safely use a box cutter and how to brush the dust onto the cardboard.  It also included a discussion of how to sweep.  This was repeated every day to the same people.   What a waste of time.

The other extreme is too little detail  The result is scheduling in months, quarters or even years where your staff doesn’t know what their objective are.

I have observed the problem of too little detail many times in my career.  Here’s the most humorous:  I once got a call from a potential client who said that He’d had someone build him a website, but it wasn’t any good.  I asked him what was wrong with it.  He replied “I just don’t like it.”    I then asked him if we could spend an hour to discuss what he wanted so I could get an idea of the work involved.  He replied “It’s just a website, I don’t think it should take five minutes to get the work defined.”  I then politely declined the job.

What this means to a Project Manager is that the level of detail in any planning or direction should reﬂect the amount of guidance the people doing the work need.

The figure  below shows a work accomplishment curve which describes the amount of work done under various amounts of management. On the left hand side, it shows that with no management (i.e., no objectives, no guidance), no work is accomplished. On the right hand side it shows that if everybody’s job is to manage (over management), no work will be done. Too much direction has the same effect as too little direction. 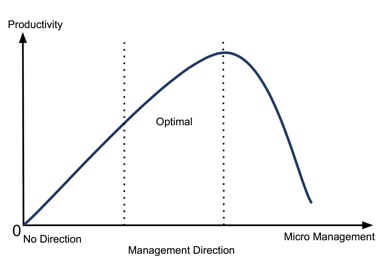 The “trick” is to give the appropriate amount of detailed instruction to maximize the amount of work accomplished. The tendency of most project managers, when faced with a problem, is to move quickly to the right side of  the curve and heavily increase the amount of management. Unfortunately, the problem may have been caused by being too far to the right on the curve in the ﬁrst place.

Another lesson from the work accomplish curve for Project Managers is that careful consideration should be given to the selection of the time unit used for scheduling. The time unit should reflect the amount of guidance the staff doing the work needs. For most projects, a duration of days or weeks is best.

Use the unit of time that makes sense. On some projects, tenths of hours is reasonable.  I’m also aware of a project, in the Middle East, for which scheduling by months was best because of supply problems.

I’ll be back in a few week with more.  Remember that the cleanliness of theory is no match for the clutter of reality.