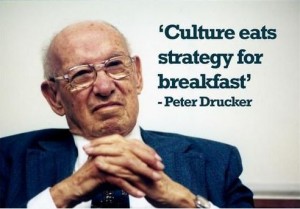 How the Project Manager responds to problems sets both the tone of the project and the extent the staff will share the information that a Project Manager must have to accomplish the project’s goals. I’ve always appreciated Peter Drucker‘s statement that “culture eats strategy for lunch” because it clearly states that the culture you create is more powerful than your strategy.

A good Project Manager rewards bad news and questions good news. If they are going to succeed, a Project Manager needs to focus on addressing the bad news first. This means creating a culture in which the project’s staff is willing to identify problems before they become serious.

You do this by treating people with respect, by encouraging people to speak up about their concerns.  I tell people who work for me that if they see me making a bad decision and don’t speak up then it becomes their bad decision.  On the other hand, if they think every decision I make is bad, then thats a different problem.  To be successful I need to know what is going wrong while I still have the ability to fix it.

This includes not using the project management tool as a punishment tool.  The Project Manager must be focused on identifying and solving problems and not be focused on assigning blame.

Unfortunately, too often,  Project Managers look for whom to blame for a problem instead of trying to first understand how to address a problem.  This results in the project staff adopting a CYA (Cover Your Assessment) attitude.   Soon the staff is afraid of the Project Manager and delays bringing the bad news to light until it can’t be covered up any longer.  Then Project Manager erupts in anger and points fingers at people.

Then, unfortunately, morale spirals downward and eventually the Project Manager uses intimidation to scare the staff into making the next milestone.     No one enjoys working on the project and staff does the minimum to get by.   Eventually, the staff wastes energy creating documentation to defend every decision in case it goes bad instead of giving the project their best creativity.

The actions of the Project Manager will determine if they are just a manager who can pressure people using intimidation or a leader who motivates using inspiration.

I’ve always told the Project Managers who work for me that the position gives them power and that it is important that they use their power for good and not evil.  I usually get a groan after the comment, but it is remembered.