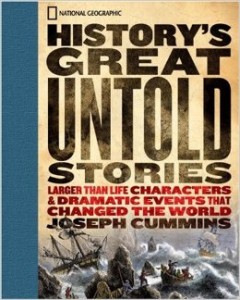 This book covers 28 interesting events and odd stories that unless you are a history nut you have never heard about.  The book is written in National Geographic’s normal,  very accessible style. Each chapter contains it’s own story so you can read it either straight through or over a period of time.

The first chapter deals with the 896 trial of the corpse of a former Pope by the Pope that replaced him.  This is clearly one of the odder happenings in history.

There is one chapter on the “filibusters”  which were small bands of heavily armed men whose goal was to overthrow Latin American governments and turn them into puppet states.   The most “successful” of these was William Walker who ruled  Nicaragua for part of 1856.

Other stories include: When China Ruled the Wave, Guano: How the world was changed by bird droppings, the Russian discovery of America and the Nazi’s quest to find true origins of the Aryan race in Tibet.

It’s an enjoyable and enlightening read.